Discover
Become a Part of the Community

One of life's most rewarding journeys is finding, purchasing and owning an Arabian horse - a breed unmatched for their beauty, versatility and companionship. These AHA programs were created to help you make that journey and get involved with Arabian horses near you! 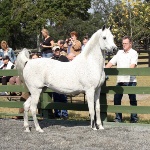 The best way to be connected in the Arabian Horse Industry is through one of AHA's many clubs. You can find clubs in your area, by visiting our Get Involved page. Select your region from the map and then locate the club closest to you. Clubs offer a variety of member benefits, activities, ways to get involved and help to promote the Arabian breed! 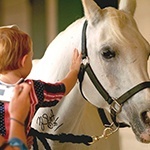 If you’ve never encountered an Arabian horse up close, start your adventure by visiting a Discovery Farm. This unique program offers you the opportunity to explore Arabian horses at farms with knowledgeable owners in a relaxed, no pressure atmosphere. You’ll learn all about the breed characteristics and gain first hand knowledge of what makes this breed truly special.

If you own Arabian horses and want to share your passion for the breed with newcomers, sign up to become a Discovery Farm.

A horse show can be a wonderful venue for a family that wants to spend a fun day together looking at horses. In order to welcome these families and individuals, the T.A.I.L. program evolved. The program's goal is simple - make people feel comfortable and welcome so that they can learn more about the Arabian. Families can be shown around a horse show venue, discover different farms, watch classes and have questions answered. This program is perfect for Scout, FFA and 4H leaders and their groups. It’s an easy and effective way for current Arabian owners and lovers to share their love for the breed with others. 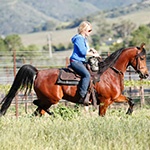 AHA has many Incentive Awards Programs however the Frequent Rider Program (FRP) is one of the most popular among those who do not compete, but simply want to enjoy riding their Arabian horse. The FRP recognizes and rewards riders for every hour that they spend riding or driving an Arabian or Half-Arabian/Anglo-Arabian horse in non-competitive activities.

The best part of the FRP is that the type of riding doesn't matter - as long as it is non-competitive! Whether you use an Arabian or Half-Arabian/Anglo-Arabian horse to trail ride, do ranch work, participate in parades, take riding lessons, train under saddle, or just ride or drive for pleasure, you can be rewarded for what you love most. 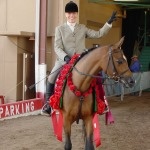 Both you and your horse can earn recognition through the AHA Achievement Awards programs. Once you sign up, amateur rider and horse points are tracked automatically throughout the year every time you compete in AHA shows/rides and some open events.

The Amateur Achievement Awards program assigns points to individual riders, handlers and drivers. Riders don't have to own the horse they compete with since these program tracks riders only. Horses can earn Achievement Awards points and have permanent symbols added to their name, signifying honor and prestige. There are six different levels that could leave your horse a legacy. 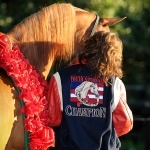 AHA offers a variety of horse shows, distance rides and competitions across the nation, in your region or even in your zip code. Take a look at the Event Calendar to find one that interests you.