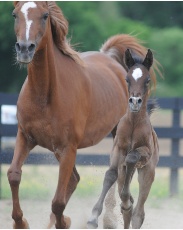 The Basis of Modern Day Breeding

By 1904, serious breeding of the purebred Arabian began on behalf of the Yeguada Militar with various buying excursions (1905-1908) into Mesopotamia, Syria and the Arabian Desert to purchase the finest breeding stock available. According to the 1905 diary kept by Captain Luis Azpeitia de Moro, 'En Busca del Caballo Arabe', they were looking for refinement, good riding mounts, height (15 hh minimum) and had age limits with a preference of 8-10 years. Boat travel was long and stressful so the horses purchased had to have known stamina. Hundreds of horses were looked at and only 23 head purchased. The 1906 buying commission sent to Poland also brought back a similar number.

However, it was the imports of 1908 and 1912 again from the desert and Poland that were the most significant on today's lines. The types chosen were predominantly Hamdani Simri noted for its excellence as a riding horse and its placable temperament and the Saklawi type noted for its refinement, beauty and speed. There were also several Managhi Sbeyli, Koheilan Ad'jouz, Koheilan Rodan and some get of a Dahman stallion, notably the stallion Ursus from Poland and his paternal sister, Damietta.

For almost 100 years since then, there have been little outside bloodlines added to the gene pool. As a private breeder, the imports made by Cristobal Colon de Aguilera, XV Duque de Veragua, from England between 1926 to 1930 had great impact. In 1935 and early 1936 he also bought all the female stock from the heirs of the Marques de Domecq stud. He was killed during the Spanish Civil War in November of 1936, leaving no direct heirs. His bloodstock, mostly from the Crabbet Stud included five daughters of Skowronek and was of such renown that it was collected by the military in order to preserve it. The stallion Razada was among the horses unfortunately killed but all those remaining were sent to their broodmare farm, Moratalla, in Cordoba. Most mares were branded and thus identified. Some with the older fillies were identified as Veragua's purebred arabians but the loss of all papers required that they be renamed with the prefix 'Vera'. These were kept by the military. The younger fillies were sold, mainly to the Duque's niece the Marquesa de Avella whose breeding program still thrives.

Then and still now, the Yeguada Militar keeps a broodmare band of 20-30 head and sells off the surplus to private breeders. They keep some 100 stallions that annually are placed in various Remount Stallion Deposits throughout the country for use of breeders and to improve the local stock for a very nominal fee. Purebred get are duly measured, identified, registered and qualified by a military commission or agent to be included in the foal registry. At the age of four years old these foals are included in the main Studbook. Grade mares or half-Arabian mares will get half papers for their foals which are not included in the Spanish Studbook. All stallions of breeding age must be certified by the Military Commission's Cria Caballar in order to be used at stud and are designated either for private or public use.

Although the numbers have increased from 328 in the early 1960s to nearly 13,000 registered Arabians in Spain today (2006), in the U.S. Spanish Arabians and Spanish Related Arabians represent far less than .1 percent of the total Arabian population. Because of their rarity and minimal numbers, this bloodline is used mainly as breeding stock. Few of these horses have actually been shown publicly yet whenever presented, Spanish Arabians and their related crosses take an extremely high percentage of wins in shows and events.

Introduced to the U.S. by James and Edna Draper in 1934 with five imports including the foundation mares, *Meca and *Menfis, no further major additions were made until the Charles Steen imports of 1965. These brought 25 more Spanish to the U.S., some en utero like *Barich de Washoe, leading sire of 104 pure Spanish foals and sire of 446 get with no less than 27 National Wins. By 1975 importations from Spain were made more feasible by the recognition of the Veragua horses in their studbook. The late '70s and 1980s saw a wave of importations from Spain, many of which were used predominately for outcross breeding. 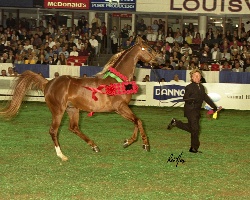 Well known names such as leading sires *AN Malik and *Barich de Washoe, the triple National Champion mare Abha Hamir, the 3/4 Spanish stallion triple National Western Pleasure Champion CA Hermoso, and the half Spanish stallions *El Shaklan and Magnum Psyche (pictured on left) are familiar to breeders the world over. As the older imported horses have passed on, newer blood is being sought after and importations have started up again in the new millennium. Because of their previously closed gene pool and the heavy line breeding up until 1970, the Spanish Arabian has remained quite distinctive in type. In breeder's terms, they tend to breed true. Due to importations to Spain of external bloodlines from 1970 onwards, the term Classical Spanish is used to designate those Spanish Arabians who trace their lineage to horses which were in the Spanish Studbook prior to 1970, thus having all four grandparents trace in all lines to the Spanish Foundation Stock, whose original Arabic pedigrees are kept in the 'Golden Books' in Madrid, Spain. As of 2007, AECCA (Asociacion Espanola de Criadores de Caballos Arabes), the National Breeders Association is the sole registering authority for Arabians in Spain. Both AECCA and its affilite member, Spanish Arabian Horse Society now merged with SAHBI (Spanish Arabian Horse Breeders International) endeavor to promote the Classical Spanish Arabian bloodlines and their related crosses. This effort and the selective breeding by Spain's Yeguada Militar and their private breeders, have made the Spanish Arabian an extremely versatile athletic horse with a willing and gentle temperament. Smooth of line, well angled with a supple neck, it is noted for its large beautiful dark eyes, dense bones, short and strong coupling, high tail carriage and its trainability. The genetic impact of this tight gene pool has excelled as an outcross. Spanish and Spanish-related Arabians have won innumerable championships throughout North and South America, Europe and the Middle East. This bloodline has many dedicated owners and admirers worldwide.

Join them and experience the Spanish Arabian for its unique temperament, elegance and quality performance.

The AHA Equine Stress, Research and Education Subcommittee on Genetic Disorders has developed this special section on genetics and genetic disorders of particular interest to the Arabian breed. The goals are to help educate the Arabian horse community, promote genetic testing, encourage disclosure of test results and support continued research.

To help support research efforts, the Arabian Horse Foundation was officially relaunched at the 2007 AHA Convention. This 501(c)(3) organization focuses on several areas of funding, including equine research with an emphasis on studies impacting the Arabian breed. Of special note, support from the Foundation has been instrumental in the development of DNA tests for Cerebellar Abiotrophy (CA) and Lavender Foal Syndrome (LFS). Please participate in supporting the Foundation's efforts by sending your tax deductible contributions designated for research to: Arabian Horse Foundation, Treasurer - Jim Cada, 1024 K. St., Lincoln, NE 68508. For more information on the Foundation or to make a contribution online click here.