Help AHA honor the legendary judges and stewards of the industry with the Hall of Fame. Learn more about our current inductees and their service and dedication to the Arabian horse industry. 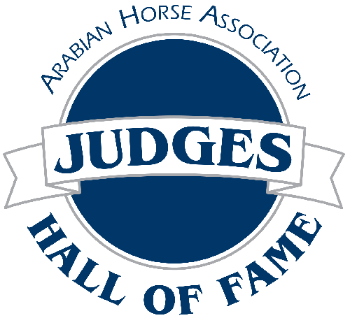 Congratulations to our 2015 Judges Hall of Fame Inductees

Bob fell in love with Arabian horses long before they were well known in the United States. He started studying and researching the breed and bought his first Arabian horse, Ronek in 1942. After showing for several years, he judged many of the early Arabian shows all across the U.S. and Canada. As Bob’s judging popularity grew, he was invited to judge some of the early Scottsdale shows at McCormick Ranch and Paradise Park. It was there that he saw *Bask for the first time, and was able to pin him as Champion Stallion. He came home and raved about *Bask’s “ring presence” as well as his amazing quality and “form to function”, which were two qualities that Bob looked for in his ideal Arabian horse. Bob also judged the National Classes in Estes Park, Colorado, and Springfield, Illinois, shows in the early sixties before the U.S. National Show stood on its own.

In 1962, Bob came home from Estes Park raving about “this tall girl from California” that showed her own “good bay horse”, Bay-abi. He and the other judge had named him the National Champion Stallion. He had great respect for Sheila Varian, and later they became and remained close friends until Bob passed away in 2008.

Bob judged Arabian horses in the era when showing was strictly for fun and bragging rights. Though he retired from judging in the early 1970s, he encouraged his daughter Shannon to get her judge’s card and follow in his footsteps of meeting extraordinary people and seeing the very best horses in the world for the love of the Arabian breed. She is very proud to accept the Judges Hall of Fame award for him.

Joyce started riding before she could walk. She would go to a small training track close to Churchill Downs with her father and found her passion for horses. Soon she started showing with a Saddlebred mare and from then on she was bitten by the horse bug.

Later on Joyce would come to own the Arabian park horse Serajac for the next 12 years and her love for the Arabian horse grew into a lifestyle. She and her husband became involved with the Kentucky Arabian Horse Association and helped in the barn office at U.S. Nationals. During U.S. Nationals, Joyce came into contact with a steward and wanted to learn more about the position.

In the meantime, her family continued to move states. She became the Director of International Disciplines for USA Equestrian and eventually moved over to their National division where her true passion lied. Joyce has been at USEF for nearly 13 years. She has since become a steward and has stewarded since 1992 and TD’d since 1996 for many shows including: U.S. Nationals, Sport Horse Nationals, Regions 7, 12, 13, 14, and 15, Scottsdale, Morgan Grand Nationals, multiple open dressage competitions, Egyptian Event, Buckeye Blue Ridge Classic, New England Morgan, Rock Creek, NSHR Finals, IFSHA World and many more. Over the past few years, Joyce shows and competes with her Saddlebred gelding in park and Ladies 3-gaited.

Bill received his bachelor's degree in Animal Science from California State Polytechnic University in 1965 and went on to receive his master's degree of Agricultural Economics from the University of Nevada in 1967. Upon graduation, Bill took a position as a profesor in the Food Marketing and Agribusiness Management Department at California State Polytechnic Univeristy and also became the Director of the W.K. Kellogg Arabian Horse Center and Equine Science Program unil 2010. He currently is Professor Emeritus at the university.

He has a long list of involvement and accomplishments in the Arabian horse industry too. Bill owned and operated Will Mar Arabians, a training and breeding facility, for 30 years. He has shown in Western, English, and halter at Class A shows, Regional and National levels. He was President of the International Arabian Horse Association in 2002, President of the Arabian Horse Association from 2003-2004, Member of the Executive Committee and Board of Directors of AHA, Region 1 Director 1991-1994 and Chairman of the U.S. Nationals show commission from 2009-2014 to name a few. He has been involved with USEF as a member of the Board of Directors from 2001-2014 and was elected treasurer from 2009-2014.

Judy has been associated with horses since 1960 - training, breeding, instructing and marketing. She has been a licensed judge since 1971, holding licenses with AHSA/USEF in multiple divisions. Her judging assignments have included numerous International and National Championship shows. Having the opportunity to travel the world, meet new horse owners and judge beautiful horses is one of the most enjoyable things in her life.

Her most recent activities include sitting on the board of the Arabian Reining Horse Association as President judging the Grand National World Championship Morgan Horse Show in the Equitation division again this year.

Judy, along with her late husband Chuck, spent 10 years managing the historic El Rancho Escondido Ranch on Catalina Island. She then went back to Arizona where she stayed at Al-Marah Arabians in Tucson, helping to finalize the last few years of operation at the farm.

Her involvement with Arabian horses and judging has been her passion for over 50 years. To be selected for induction into the Arabian Horse Association Judges Hall of Fame is the “greatest professional honor” she can imagine. In the words of Judy Kibler, “Thank you to all my special friends for sharing this wonderful life with me.”

Richard’s lifelong passion for the equine world had early roots in his family’s business in Colorado and was launched in the early 1970s with John Rogers Arabians in Walnut Creek, California. He went on to serve as head trainer for owner-breeder John Davidson in Calabasas, California, until joining the team of Nichols-DeLongpre’ in 1976 at their farm in Bridgewater, Connecticut. Richard was a valued trainer for NDL and assisted with their “glamour sales” of the 70s, along with subsequent sales when NDL relocated to Santa Ynez, California.

During this period with NDL, Richard was instrumental in developing the apprentice programs at an Arabian horse facility. Many NDL apprentices have gone on to become successful judges, trainers and breeders. Richard remained with NDL and later with DeLongpre’ Arabians until the operation ended in 2002. During his tenure as a trainer, Richard earned numerous Canadian and U.S. National Top Tens, as well as National and Reserve National Championships in Halter, Western Pleasure, Pleasure Driving and English Pleasure.

Richard’s career path then shifted to horse show judging. He has held Registered status with the Arabian division for over 30 years and is currently a USEF Registered judge with National Show Horse, Western, Friesian, Andalusian, Morgan and Shetland breeds, and has judged each of their National and World shows on numerous occasions. Richard is a recorded judge in the Saddlebred, Saddle Seat Equitation, Hackney and Roadster divisions with USEF. He is also a senior judge with both Miniature Horse Association – AMHA and AMHR – as well as with the Pinto Horse Association.

In 2012 Richard was inducted into the Pinto Association’s Judges Hall of Fame. Richard has been an invited judge throughout the U.S., Canada, Australia, New Zealand, South America, Europe and South Africa. He is well known and highly regarded for his honesty, fairness and integrity and enjoys widespread respect among his peers and the general public.

He has been actively involved in the horse industry for over 60 years as an owner, rider, parent or a junior exhibitor and show official. He has been a USEF steward since 1972, stewarded for the U.S. Nationals, Youth Nationals, Sport Horse Nationals and many Arabian Regional championship shows throughout the U.S. since the mid-1970s. He has quite the impressive resume with his long list of accomplishments. He is an instructor for USEF’s Stewards Training Clinics since 1983, wrote the pamphlet “A Guide to Western Equipment” which was published by USEF and used at Judges and Stewards Clinics throughout the country, presenter/lecturer at many horse club meetings, seminars, clinics, symposiums on various topics related to showing horses; such as USEF/AHA rules, equipment, etiquette, etc. and was the Chief Steward for the 1984 Olympic Games in Los Angeles where he trained and supervised a staff of 30 stewards.